The psychic structure of the Substance Use Disorder 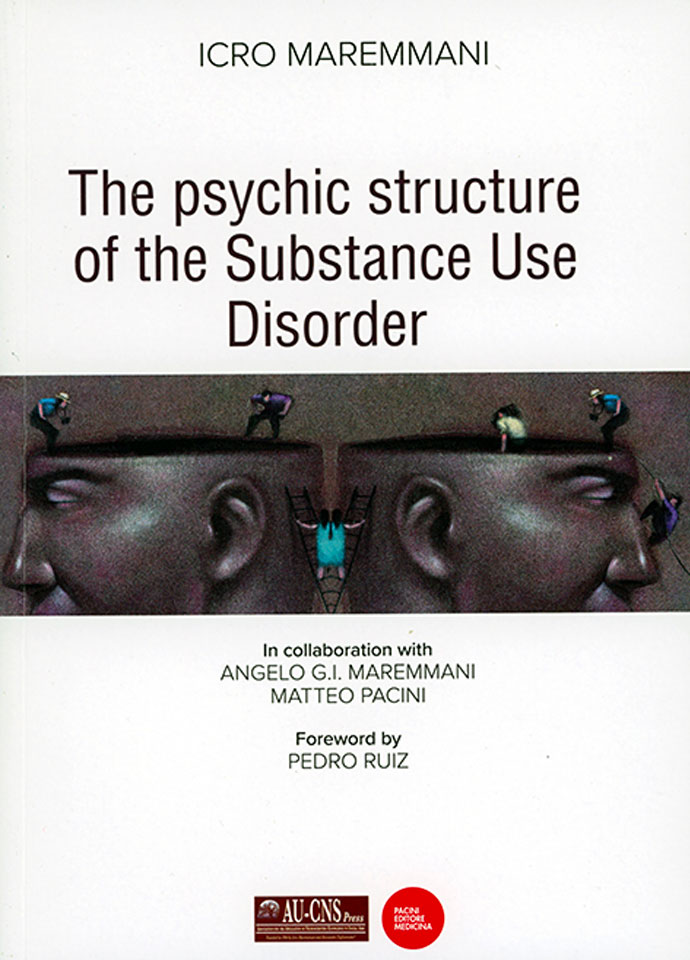 You can receive this book paying a contribution of € 40,00, shipping expenses included.

The progress in medical science that has been achieved at unprecedented speed in recent years has added much to our knowledge, whether the viewpoint taken is neuro- biological, physio-pathological or clinical. This has brought urgency to the task of inves- tigating the changes to be made in updating our perspectives on how best to classify the whole area of mental diseases. The series of classifications provided in successive editions of DSM has, over the years, evolved in its way of naming dependence on toxic substances, which is referred to in this volume by using the technical terms ‘Substance Use Disorder’ (SUD) and, partly to indicate the severity of the condition, ‘addiction’. In DSM, this severe condition had, for many years, been considered as no more than a single symptom of a personality disorder, until a radically different status was assigned to it – that of playing the role of an independent psychiatric disease. Over time, the precon- dition for writing a diagnosis switched from ascertaining a state of physical dependence and/or a withdrawal syndrome to a search for behaviours linked with craving together with behavioural dyscontrol, but to date no psychopathology specific to SUD has, as such, been identified or described. It must be pointed out that the very idea that SUD might be the one and only mental pathology to have no distinctive psychopathology whatsoever appears to be highly improbable, as is the notion that every single aspect linked with the dimensions of impulsivity, thought and affect must be viewed as induced by the substance used only in the phases of dependence or abstention, or otherwise as being the outcome of psychiatric comorbidity.
The term ‘craving’ is used to refer to an irresistible desire for the substance being used and, only a short while ago, it was officially added to the list of criteria required to authorise a diagnosis of SUD. Even if craving is a central feature of the evolution of that condition, with special reference to the clinical picture, studies on craving have so far been ne- glected, just as no measurement scales have so far been devised to provide a profile of behaviours linked with craving.
It follows that to date no corpus of knowledge exists that is pertinent to the relationship between the psychopathology of addiction and craving behaviours.
In other words, psychiatric comorbidity, which certainly exists in addiction, and which leads to clinical pictures that are hard to interpret diagnostically and therapeutically – be- ing defined as cases of ‘Dual Disorder’ by the World Association on Dual Disorder – ap- pear to have nothing in common with a psychopathology that belongs to the domain of addiction; thus there is no parallel with the affective disorders that belong to the psycho- pathology of depression, or with the thought/reflective disorders that belong to the psy- chopathology of schizophrenia. Thus, it becomes extremely difficult to deny that there are. The authors of the present book are fully convinced that a psychopathology specific to SUD, once identified, has to be demonstrated to be independent of typical patterns of dependence on the socio-environmental and clinical levels, while, at the same time, it must be able to significantly differentiate these individuals from other people with mental disorders.

In this volume Icro Maremmani and his talented co-workers have set themselves the task of writing an overview of the experimental studies carried out by their research group with the aim of identifying a psychopathology specific to the condition of dependence on psy- choactive substances, and exploring the relationship between this psychopathology and behaviours arising from craving.
This book, besides its evident usefulness to professionals, is well written and always keeps specific readerships in mind. The primary advantages of its availability will be felt in promoting the excellence of the care provided to our patients, both through educational and training channels and in stimulating future research.